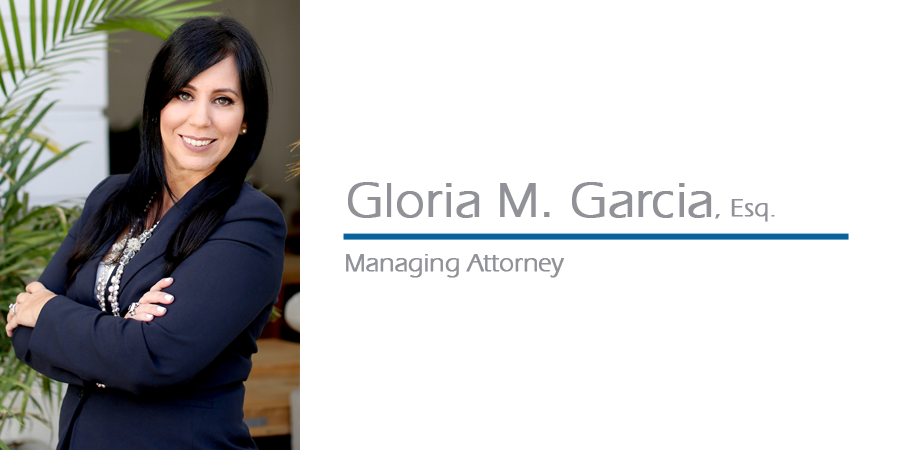 Attorney, Gloria M. Garcia obtained a Bachelor’s degree in Criminal Justice from Florida International University. In 1998, she obtained her Juris Doctor Degree from St. Thomas University where she was an active member the Moot Court team serving as Executive Vice-President, The Hispanic Bar Association, FAWL, Peter T. Fay American Inns of Court member, Phi Delta Phi, Honor Legal Fraternity and the Cuban American Bar Association. She is a member of the Florida Bar and is Bilingual.

Mrs. Garcia has been primarily practicing worker’s compensation for the past 17 years representing injured workers. She currently manages her own private practice in Miami Lakes. In addition to her practice, she has been on the board of directors of the Miami Lakes Bar Association since its inception serving as Past President. She has also been a member of Florida Workers’ Advocate since 1999 where she takes a great deal of pride in representing injured workers and has been invited on MiraTV as a workers compensation panelist and political correspondent. She has been the Chair of Relay for Life of Miami Lakes for the last 3 years fundraising for the American Cancer Society and is actively involved in raising breast cancer awareness and dedicates her spare time to volunteering at her children’s schools and training middle school students and local law school students for Mock Trial Competitions. Mrs. Garcia is also a member of Ellesquire a female networking group for professional women. Mrs. Garcia was awarded the Women of Distinction 2017 Business award by the Town of Miami Lakes for her involvement in the legal field and in her community.